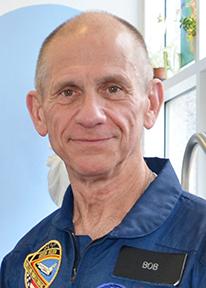 Robert J. Cenker, a Rutgers-New Brunswick electrical engineering alumnus, was a crew member on the 1986 space shuttle Columbia, where he changed the face of cable TV across the United States. During his six-day mission, which began Jan. 12, 1986, he observed the deployment of an RCA satellite and conducted an experiment on an infrared imaging camera. In total, Cenker traveled more than 2.1 million miles in 96 Earth orbits and logged more than 146 hours in space. The mission was the final flight before the Challenger disaster, which killed seven crewmembers, including teacher Christa McAuliffe, who trained with him. As a result, Cenker's Columbia mission was called "the end of innocence" for the Shuttle program.

In celebration of the 50th anniversary of the Apollo 11 moon landing, Cenker will join students from the New Jersey Governor’s School of Engineering and Technology, TARGET and EOF on July 19 to discuss his journey into space and offer a glimpse of what it takes to become an astronaut. He will describe how the political climate has changed since Neil Armstrong set foot on the moon in 1969 and how the country needs to band together to return to the moon – and perhaps reach Mars.

In honor of the 50th anniversary of a man landing on the moon, the NJ Space Grant Consortium and SoE Undergraduate Education – Office of Student Services, will be hosting Rutgers alumnus, Bob Cenker, to share: