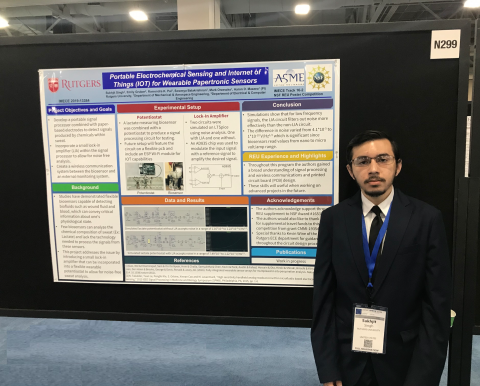 “Studies have demonstrated that flexible biosensors are capable of detecting biofluids such as wound fluid and blood, which can convey critical information about one’s physiological state. However, few biosensors can analyze the chemical composition of sweat (Ex: Lactate, Cortisol, etc.) and lack the technology needed to process the signals from these sensors,” says Singh. “We address this issue by introducing a small lock-in amplifier that can be incorporated into a flexible wearable potentiostat to allow for noise-free sweat analysis. Applications of such a device include monitoring the health of athletes, soldiers, astronauts, and animals.”

Singh says his research goal is to develop new devices to continuously monitor the health of users and lower the cost of healthcare.