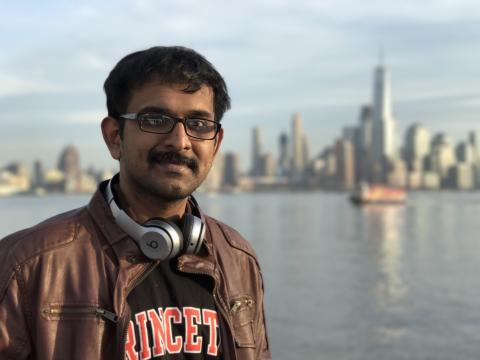 Short biography:
Neelakantan (Neel) Nurani Krishnan is a Ph.D. candidate at WINLAB, Department of Electrical and Computer Engineering, Rutgers University, NJ, USA. He is advised by Prof. Narayan B. Mandayam. His research interests lie at the intersection of next generation networking (specifically Wi-Fi networks) and deep reinforcement learning. Neel has interned in leading research labs in the US, including Nokia Bell Labs and Schlumberger-Doll Research Center. He was awarded as the best TA in the Department of Electrical Engineering, Rutgers University, in May 2017. Neel is the recipient of student travel grants from IEEE Globecom, ACM SIGCOMM, and other leading conferences in the field of wireless networking. He holds a Masters in Electrical Engineering from Rutgers University.

Abstract of the paper:
We present D-MIMOO, a distributed MIMO Wi-Fi architecture that boosts average network throughput compared to state-of-the-art access points with co-located antennas (baseline configuration). Designing a distributed MIMO system invites us to redesign fundamental Wi-Fi concepts, such as carrier sensing multiple access (CSMA) which governs channel access among Wi-Fi access points. We also propose a novel way of using channel reciprocity and the network topology to select downlink MU-MIMO recipients. The proposed solutions are standards compliant, do not require modifications at the user equipment and hence will work with legacy 802.11ac devices. We compare the performance of the D-MIMOO architecture to a baseline dense enterprise Wi-Fi deployment, and observe 2.5x improvement in median and 104% increase in average downlink per-stream throughput.
Chen Wang received the award to cover the expenses of travel to Beijing, China to present the paper "Towards In-baggage Suspicious Object Detection Using Commodity WiFi" at the IEEE Conference on Communications and Network Security (IEEE CNS) that was held from May 30 to June 1, 2018. This paper has also received the Best Paper Award at IEEE CNS.
Short biography:
Chen Wang is a Ph.D. candidate in Electrical and Computer Engineering at Rutgers University and works in Wireless Information Network Laboratory (WINLAB) under the supervision of Prof. Yingying Chen. Chen Wang received his bachelor’s and master’s degrees from the University of Electronic Science and Technology of China (UESTC) in 2009 and 2012. His research interests include cyber security and privacy, smart healthcare, mobile sensing and computing, Internet of Things and machine learning. He is the recipient of three Best Paper Awards from the top security conferences, IEEE Conference on Communications and Network Security (IEEE CNS) 2018, IEEE CNS 2014 and ACM Conference on Information, Computer and Communications Security (ASIACCS) 2016. His recent research won the Best Poster Runner-up from ACM MobiCom 2018. From 2014 to 2018, his research studies have been widely reported by over 150 media outlets, including Rutgers News, Stevens News, IEEE Spectrum, NSF Science 360, CBS TV, BBC News, NBC, IEEE Engineering 360, Fortune, ABC News, MIT Technology Review, USA Today, Daily Mail, Science Daily, CTV News, etc.
Abstract of the paper:
The growing needs of public safety urgently require scalable and low-cost techniques on detecting dangerous objects (e.g., lethal weapons, homemade-bombs, explosive chemicals) hidden in baggage. Traditional baggage check involves either high manpower for manual examinations or expensive and specialized instruments, such as X-ray and CT. As such, many public places (i.e., museums and schools) that lack of strict security check are exposed to high risk. In this work, we propose to utilize the fine-grained channel state information (CSI) from off-the-shelf Wi-Fi to detect suspicious objects that are suspected to be dangerous (i.e., defined as any metal and liquid object) without penetrating into the user’s privacy through physically opening the baggage. Our suspicious object detection system significantly reduces the deployment cost and is easy to set up in public venues. Towards this end, our system is realized by two major components: it first detects the existence of suspicious objects and identifies the dangerous material type based on the reconstructed CSI complex value (including both amplitude and phase information); it then determines the risk level of the object by examining the object’s dimension (i.e., liquid volume and metal object’s shape) based on the reconstructed CSI complex of the signals reflected by the object. Extensive experiments are conducted with 15 metal and liquid objects and 6 types of bags in a 6-month period. The results show that our system can detect over 95% suspicious objects in different types of bags and successfully identify 90% dangerous material types. In addition, our system can achieve the average errors of 16ml and 0.5cm when estimating the volume of liquid and shape (i.e., width and height) of metal objects, respectively.